Oh, kids, this is going to complicate everything. 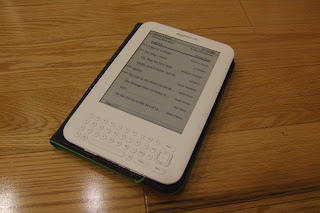 At this point in my life, I buy about five books a year.  All that is about to change.  The Kindle will be compatible with the library soon; till then, there are plenty of ways around these things: free samples, deep discounts, Project Gutenberg.  And there are things that can be fiddled with to solve these problems.

But mostly, I'm PILING up sample chapters right now.  It's light, but I can't actually read any faster on it than I could before.  I'm actually so excited about all the possibilities for what to read that I almost can't settle on something and just start reading.

Tell me it'll get more settled?  Oh, but don't.  Let me jitter like a caffeinated maniac from book to book till I pass out from the excitement--please!
Posted by LibraryHungry at 9:21 PM 3 comments:

My high school history teacher, Miss Lavoie, once mentioned to the class that she was thinking of writing a paper on some topic we were discussing.  This led to a long, confused discussion about why an adult--anyone, really--would write a paper that wasn't required for a grade.

Suddenly I understand it.  There is so much going on in Lifelode

, by Jo Walton, that I'm not even sure I could list it all, let alone expound on it.

Let's start with the most obvious, interesting, easy to talk about fact of this book: its relationship with time.  The whole book is told in the present tense--but the timeline jumps around.  Every scene is in present tense, including flashbacks, memories within scenes, everything.  There are a very few words in the past tense within the book outside of dialog.  When it does appear, it's invariably referring to something that happened a moment ago in the same scene, not an earlier moment in time.

An example: Hanethe is helping with the harvest and thinking about how much she dislikes the job and always has.


She remembers, as she thrusts a gathered sheaf into the hands of the youngster behind, the harvest after the plague.  Young Hanethe cuts and cuts, her legs trembling at every step, not daring to shut her aching eyes for a minute in case she falls asleep in the field.

The narrative also skips around in time, not only from a distant future where several characters are discussing whether to write a book about the main events of the story, but laying down scenes out of order, introducing the character who arrived second, then later the one who arrived first, then later still showing the arrival scene of the second.  We learn about the night the alarm was sounded and everyone armed themselves, and then we see the characters putting away their weapons.  Several tranquil, domestic scenes later we learn what happened on the wall that night.

And the thing is, it's not awkward.  So far, I'm pretty sure I haven't been confused once.  I've been curious, yes, and really wanted to know what was going on, but not confused at all.

Another element of this relationship with time is that the main character, Taveth, can see through time a bit.  When she's talking to someone, she sees shadows of their older and younger selves, who they have been and who they will be.  She gets hints from these people of what might happen, though only slight--she doesn't converse with these shadows.

Even the reality of this world has a complicated relationship with time.  Days pass differently depending on where you are geographically, and depending on which direction you travel in, the year you're gone might pass at home as a month or a decade.

It's confusing just to write about, right?  Look how long this blog post is!  But the thing is, it's seamless.  I've read  more confusing world building in nonfiction books, I kid you not.  It's a smooth, seamless read, and the hints and indications you get out of order build the story in exactly the right way.  It's a domestic fantasy, for the most part, about the relationships of the people at Applekirk and how a moment of crisis--one moment, as we clearly understand, no more nor less telling than any other moment in the centuries of this village--touches all those relationships.

This post is already huge, and I haven't even touched on the range and depth of the meanings of love that are addressed here (brief rundown: spouses, permanent pairings called sweetmates, casual lovers, the desire to hold onto your children, the rush of unexpected sexual desire, the affection you feel for an incredibly irritating 14 year old--especially when he was a sweet kid, and double especially when you can sort of see through time and know that he's going to be a good man when he grows up).  Again, I'm pretty sure I'm not being hit over the head with it (though sometimes I miss it when books do try to bludgeon you, so corrections appreciated)--it's just there, as natural as breathing--this is a world in which all these loves exist, and here is how they work.

And of course the other topic I wanted to cover, which is Jo Walton's work in general and how you MUST read Ha'Penny

and Tooth and Claw

, and I must read The King's Peace

as soon as possible. Lifelode is deceptively simple, domestic, and not earth-shattering.  But as my sister is fond of saying about her nephew: it's freaky smart.
Posted by LibraryHungry at 9:45 PM No comments:

I am so bad at being between books.  I don't know how to start a new book--I'm never in the middle of nothing.  But right now, I find myself kind of adrift.  I've started Wise Man's Fear, but it's way too heavy to carry to work.  I'm in the middle of Outside In, but to be honest, I'm not thrilled, and it's due tomorrow.  Rose Red is a comic and The Help is an audio book--both are great, but they're not the same.

And the crazy thing is--after all this talk about my long list of things to read--I can't seem to start anything.  I think it's the embarrassment of riches.  Everywhere I turn, there's something exciting that I want to read.  Also, I'm so used to looking at my list of library books to figure out what's urgent; now that nothing is, I don't know what to do without that guidance.  I mean, I still have five library books out, but none are so imminently due that I have no choice but to read them.

There's also this vague, ongoing sense that I need to read something more mainstream.  So that big pile of YA and fantasy and science fiction is hard to sift through.

So, with a little distance and a library book in my bag, I'm making a decision.  Tonight, at home, I'm going to start reading:

Hang onto your hats, kids.  We're diving right in.
Posted by LibraryHungry at 2:19 PM 1 comment:

I'm surprised by how much I like Rex Stout's Nero Wolfe novels.  The Mother Hunt is only the second one I've read (The Golden Spiders

was the first), and both of them have been so much fun.  I don't know why I had any doubt, since Kris has never steered me wrong, but somehow mysteries usually aren't on my radar, so I don't assume I'm going to enjoy them.

But these books are a blast.  They're short and fast, the traditional kind of mystery where you have all the information, but usually might not put it together.  This book isn't an investment--it's like watching a really good hour of TV.

A big factor in my enjoyment, I think, is competence. I've talked before, I think, about how I'm a sucker for folks who are good at what they do (as evidenced by a history of otherwise inappropriate work crushes and a fondness for the TV show Leverage).

Archie Goodwin--our narrator and detective Nero Wolfe's right hand man--is a superior example of competence.  He knows what questions to ask, notices what needs seeing, reads people like the proverbial book, and does all the legwork.  His colleagues are equally good at what they do--let me give you an example of the bluff, playful, competent world Archie runs in.  Let's meet Saul Panzer.

....when I rounded the bend [I] saw Saul's car, off the road at the wide spot.  When he saw me he flopped over on the seat, and when I arrived he was snoring.  He isn't much to look at, with his big nose and square chin and wide sloping brow, and snoring with his mouth open he was a sight.  I reached in the open window and twisted his nose, and in a millionth of a second he had my wrist and was twisting it.  There you are.  He knew I would go for his nose before I did.

What is that but classic noir characterization?  These books aren't about emotions running high, or the narrator's passions, or secrets, or his drinking problem or his girlfriend.  They're about good, solid detective work--the original procedural.

The main thing I can't figure out is what Archie needs Nero Wolfe for.  Wolfe is his own kind of competent--food, orchids, imperiousness, and, reluctantly, thinking about mysteries.  He never leaves the house, reluctantly works about four hours a day, and generally gives Archie marching orders.  But Goodwin thinks on his feet, reads people, and rarely misses anything Wolfe notices.  Very occasionally, Archie runs out of ideas and Wolfe comes up with one.  Usually Wolfe solves the mystery, but I'm not 100% convinced that Rex Stout doesn't throw him those moments to keep him in the book.

Because of course, Wolfe is the character.  He's the bombastic, opinionated one.  Goodwin's just about dames and work and having a job.  He's an icon, and you have to have one of those if you're going to write 10,000 detective novels, and make me read everyone.
Posted by LibraryHungry at 10:08 AM 1 comment:

Do I have Good Taste, Or What?

Tor took a reader poll of the best sci fi and fantasy books of the past decade, and it stokes the fires of my PLR.  Let's take a look at the list.

So let's see.  Of these ten books, three are in my pile to read as soon as humanly possible.  Two others are later books in series whose beginnings are in the same pile, meaning fully half are represented by my official declaration of AS SOON AS POSSIBLE.

is around here somewhere; I loved Clarke's book of stories set in the same world.  I picked up a book by Brandon Sanderson, because Patrick Rothfuss loves him so puppy-doggishly.  Elantris

, I think it's called.  So really, on this list of ten books, only three are not in some way present in my house and waiting eagerly for my attention.  There are only three books here whose representatives I don't own.  This strokes my ego, proving that I have Good Taste In Literature, Or At Least In Novels.

, A Game of Thrones

--are godawful long.  We're talking a couple inches thick, minimum.  Wise Man's Fear is also printed on thin, heavy paper, and weighs twice what you expect just looking at it.

I have my summer cut out for me.
Posted by LibraryHungry at 10:07 PM 1 comment: