Hiatus means backlog, and that means mini-reviews!  It's too bad, too, because I had clever titles for these reviews.

Let's start with Moral Ambiguity, Part 3: Not That Ambiguous.  Because I was on a little moral ambiguity roll back there, and Not a Drop to Drink, by Mindy McGinnis, fit right in. 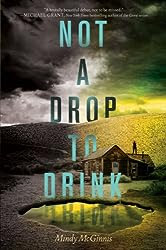 Lynn lives alone in a world where you guard what you have closely--especially water.  Since her mother's death, she's on her own in protecting the pond that keeps her alive.  She's never exchanged more than a handful of words with anyone but her mother in her life.

But when she encounters a wandering family who can't take care of themselves, she agrees to take in their five year old daughter until they can get back on their feet.  Lynn's growing connections to the people around her--to fierce, fragile Lucy; her very pregnant, very angry mother; her young, helpless uncle; and Lynn's own longtime neighbor whom she barely knows--change how she views everything.

Their world is full of danger, and when the time comes to protect themselves, Lynn's matter-of-fact ability to do what needs to be done is vital.  This is where the post title comes in, and what I think made this story so good.  Lynn was raised by a hard woman, and her values are frontier values.  You care for yourself and your own, you don't let yourself be taken advantage of, and you take action when it's needed.

The other people in the story are more "civilized"--they come from the city, where the rule of law and the structures of society remove a lot of the decision making from life.  I've always thought it was interesting that this invisible thing called civilization--the formal structures like police and roads, and the informal ones like the social contract and neighborhoods--really hold up a lot of our lives.  There are a million things that you hardly think about that go into keeping the world running, and when you remove the automation from those things, the bare machinery of humanity is exposed.  When do you kill a man who is going to come and steal your water?  When he's hurt you?  When you're sure he's coming for you? When you've seen him hurt someone else?

Lynn's internal barometer is solid--she knows right from wrong, and she doesn't argue with herself.  The lines that she will and won't cross are not where ours might be, but they're all the stronger for it, and I think that watching Lynn grow without compromising herself was the most interesting thing about this book.

Next, Is There Life on Maaaaaaars?  Yes, there is--Mark Watney is his name, and he's been left for dead when the third manned mission had to evacuate early in extreme weather.  He's Andy Weir's The Martian, and he's a smart, cheerful, ingenious fellow who can make science fun! And lifesaving! 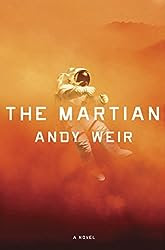 So Mark's stuck on the planet with all the supplies for six people to spend one month on the planet.  The rest of the crew is en route back to Earth and doesn't know he's alive. The communication equipment's been destroyed, so he's on his own.  His only hope is that the next mission is scheduled to arrive in four years.  Now he's just got to live that long.

This is not a psychological study of a man alone.  This is handbook for survival.  Food, shelter, resource allocation, problem solving.  The positivity was Capraesque, but that's what made it so good--it wasn't about how awful people can be, or how hard it is to be human.  This is man vs. nature in its purest form, and you know who wins?  SCIENCE!  Science proves how freaking awesome it is, and you will wish you knew more about chemistry and engineering when you are done with this book.

Seriously, this has been a great book year.  I'm totally on a roll.
Posted by LibraryHungry at 10:51 PM 1 comment:

I read a lot of YA, but I read very, very little that takes place in high school.  Most of it is fantasy (magic school?  assassin school? I'm in), and some of it is sci fi, and some is realistic, yes, but it's not about the small, fishbowl universe of high school that seems so incredibly important when you're in the middle of it.

But I picked up Philip Siegel's

The Break-Up Artist from NetGalley anyway.  The premise was intriguing--Becca thinks high school relationships are a tool of the social hierarchy ever since her best friend ditched her for a hot boyfriend and a huge jump up the social ladder.  She's developed a lucrative business as the anonymous "Break-Up Artist," and will split up any couple in school for $100.

I was hoping for some sharp snark and cynicism, but what I got wasn't that--it was much more rich and complicated.  Getting ditched by her best friend, Huxley, three years ago threw Becca off and made her seriously cynical.  When her older sister's fiance left her at the altar more recently, it became perfectly clear that love is a joke, and that it's all about social climbing, securing the boring suburban life, "winning" the game.  The fact that Becca's current best friend, Val, is desperate for a boyfriend and that her parents seem to be disinterested roommates just seal the deal.  So when jilted best friends and jealous exes offer her money to end relationships, Becca feels like she's doing the world a favor.

But when her toughest job offer comes in--break up the school's sweethearts, her former BFF Huxley and captain of the football team Steve--Becca starts to find herself looking at the difference between lies and illusions, including her own.

I have no idea if everyone is going to react to this book the same way I did, but I imagine I'm not the only one out there who was pretty much entirely out of the social scene in high school--dating was not something that had anything to do with me.  But more than that, I related to Becca's experience with Huxley.  I got ditched by a best friend at the end of middle school (not for a guy, but for more popular friends), and it messed up my sense of friendship and of self-worth for at least a decade after that.  Not, like destroyed me--it destroyed me for a few weeks.  But I definitely believed that I was not really a good catch as a friend, and that you couldn't really trust your friends to stick around, for a long time after that.  I believed that I was someone who cranked through friends and couldn't have long-lasting relationships.

So the fact that Becca has this very messed up view of the world because of what happened to her just really touched me.  And the funny thing is, there's a level on which she's not entirely wrong--I mean, high school relationships are for the most part, not about true love forever.  They're about learning yourself and making adult connections,  hormones and romance and social roles.  Sure, there are real people involved, and some people marry their high school sweethearts, but it's not so common that a little cynicism isn't a valid approach to the issue.

But in the crazy swirl of gossip and true love always and PDAs in the hall, can you blame Becca for taking the grain of truth that is "most of this stuff that all these kids are so worried about is bull" and following it way to far to "all these people are deluded and romance is the opiate of the masses?"  It's such a natural progression, and such a sensible conclusion reached so wrongly, and such a lot of tough stuff that she's going through that watching her untangle the mess--and watching her own high school hormones lead her into some bad decisions herself--is really, really satisfying.

It's amazing to me that this book exists--a book about teenagers who act like teenagers and make a lot of stupid and cruel decisions, but which makes sense to me as an adult, and is really satisfying on that level.  Also, it's a Harlequin Teen book written by a guy, with a female narrator that I find totally believable.  This book is a freaking unicorn, people.  Thumbs up.
Posted by LibraryHungry at 10:20 PM 1 comment: