Psychologically speaking, this has been a weird month for me. I haven't read a single novel yet. Since you’re reading my book blog, you probably have an idea how weird this is. I will admit with chagrin that I’ve been reading lots of book-length fanfiction, but I’m not sure how to talk about that, so I’m going to skip it for now.

Instead, let’s talk about the one book I did make it through—Randall Munroe’s What If? There’s a good chance you’re familiar with his work from xkcd, his webcomic about science and life and stick figures, which is exactly what any kind of media at all should be—reverent and irreverent at the same time, intelligent and hilarious and poignant by turns and sometimes simultaneously. 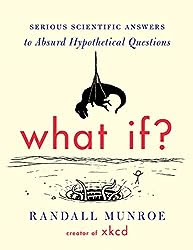 “What If” is a column on the xkcd website where people ask unlikely or impossible questions, and he uses science to figure it out. What would happen on Earth if the sun disappeared? How long would it take to print out Wikipedia? What would happen if you made a periodic table wall out of bricks of the different elements?

A surprising number of the answers are “we would all die horribly” (I don’t think that result from printing out Wikipedia, so there’s something), but the level of attention to detail and scientific explanation is absolutely a blast. There are xkcd-style illustrations throughout, there are funny footnotes, there’s dry humor. If you liked The Martian (which you did, of course you did), you might have a lot of fun with this one—I can picture Mark Watney writing in to Randall Munroe for advice.

I used to have a high school teacher who had an Ultimate Dinner Party list—all the people, living or dead, whom you’d want to have at your dream party. Oscar Wilde, Richard Feynman, Ida B. Wells, and, I’m now pretty sure, Randall Munroe.

I don't make any promises about being back on the blogging bandwagon (though a lot of my favorite bloggers are mostly offline, so maybe it's just a different bandwagon? Hi, Aarti!), but I did actually read a novel last week, and I've started another one, and maybe, just maybe, next week will be different.

In the meantime, if anyone wants to rewatch Veronica Mars with me, give a holler.
Posted by LibraryHungry at 10:13 PM 1 comment: