Once again, my Diverse Universe book reflects another ongoing theme in my reading.  This time, it's October (or it's going to be) and I'm reading thrillers and chillers. Besides discovering Gillian Flynn and rereading some of my favorite Dean Koontzes (Twilight Eyes), I picked up My Soul to Keep, by Tananarive Due.

Let's start with her name, because it's lovely and fun to say.  I found this book on one of the lists Aarti posted at the beginning of the blog tour.  It's kind of a thriller--it's actually got a Dean Koontz vibe, in that normal people are living normal lives until something abnormal starts happening.

Jessica is an up and coming young reporter at a newspaper in Miami.  She's got a great, loving husband that her friends call Mr. Perfect, a beautiful five year old daughter named Kira, and a good shot at the Pulitzer for her investigative work on elder abuse in nursing homes, as well as a book deal in the works.  Everything's coming up roses.

What she doesn't know is that her husband's past is about to catch up with their perfect life--and it's a long past.  David has a secret from his wife--and everyone.  Five hundred years ago in Africa, he underwent a secret ritual to become part of a brotherhood of immortals.  David can't die. Membership in this brotherhood comes with a lot of rules, though, especially around secrecy, and his brothers are coming to make sure he obeys the rules.

Now, the thriller is really good--you get the story from Jess's side of the weird things that are going on, stuff she notices about her husband, mysterious happenings.  And you get David's point of view--memories of other lives he's lived, previous loves, and how immortality has affected  his personality.

And that, I think, is the absolute coolest part of this book.  We spend a lot of time with David.  There's almost nothing factual that we don't know--details, sure, but there's no big mystery.  We know where the immortality came from, how he feels about it, and how the brotherhood works.  What's fascinating to read about, though, is his personality.

There are so many layers to it.  First, he's Jessica's perfect husband, who makes breakfast for their daughter every morning and cried when the dog died.  He really is the Mr. Perfect that her friends describe.  But the more you get inside his head, the more you--not start to wonder, but start to see how different facets of a personality work.  How love for one person can make someone change the way they act, and you wonder how much is because she inspires him and how much is because he wants to please her.  You see how an immortal might see a mortal life as meaningless, and how moving through life in a world full of people who are dying could chafe.  You wonder whether callousness is natural, or fiendish.  You wonder what he was like before he was like this. 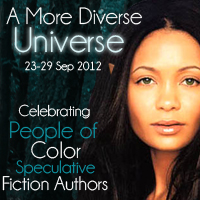 And the thing is, I don't know the answer.  There are so many aspects of this character that are straight out of the abuser's handbook, and in a lot of ways (a LOT), David is pretty explicitly a bad guy.  But he truly loves Jessica and Kira, and that makes you wonder what exactly love means from someone who is, on a very fundamental level, a bad person.  It's not like it redeems him, and it's not even like his past explains his evil.  It's more like his evil resides right up against his love, and that he doesn't really seem to know the difference.  And Jessica lives with him and doesn't see so many things about his personality when he's not trying to hide them; he's doing what comes naturally, which is pretty kind and loving where she's concerned.  This is the absolute creepiest part of the book, and I'm finding it really creepy.

Really fun book--definitely more of a thriller than a fantasy novel, but if a working mother, a mystery, and a bunch of African immortals sounds good to you, then you should definitely give it a shot.  I know I'll read the next one (next one--yay!), My Soul to Take.
Posted by LibraryHungry at 10:46 PM