Not to Be Confused with David Bowie

Okay, first: if you're like me, when you think "Goblin King," you think of this guy: 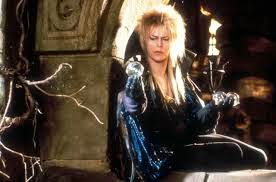 Right?  But don't be confused.  We're talking about a book called The Goblin Emperor, no matter how many times I tried to make Maia the Goblin King in my head.  And Katherine Addison's protagonist, Maia, does not look anything like our pale, lean Mr. Bowie above.

In fact, quite the opposite.  He's the fourth son of the emperor of the elves, by an unloved and set-aside goblin wife who was married for political reasons.  Maia is short, stocky, dark-skinned, and relatively uneducated.  But when his father and three older brothers he's never met all die tragically, he finds himself thrust into a role he's entirely unprepared for, and that not everyone wants to see him fill.

This book has gotten a lot of much-deserved love around the internet.  It's a very specific kind of book, about a mannered society where form is very important and meaningful.  You'd say it was a story of manners, but it's not, exactly, because most books like that stay a bit removed from the let-down, informal internal lives of the characters. The Goblin Emperor is very much about how these social forms are isolating, but also how they are the bones of civilization.  I was reminded of reading Dune, and how the many layers of subtle behavior are parsed instinctively by the politicians.

Maia has no one, in the world.  His mother died when he was young and he was sent into exile with a distant cousin to raise him.  This cousin was angry, resentful, and cruel to Maia, leaving the boy completely unprepared to live in polite society, never mind rule it.  When he gets to court, he's faced with problems as basic as how to live with constant bodyguards and people needing things from him and as complicated as determining whether his father's death was entirely accidental.

So I will say that I loved this book--loved the world building especially, and loved that Maia was a good character--smart if uneducated, determined to do the right thing, if not without resentments and angry impulses.  Most people, in fact, were good here, which I also liked--pompous did not equate to evil, and everyone was trying to make things work, as far as they could.  There were bad guys, but most of them thought they were doing good, one way or another--if not objectively, capital-G Good, then at least doing the best they could toward whatever end they thought was important.

A couple of things tripped me up in the book--one was the language, which was very cleverly used, but got away from me at times.  I completely lost track of everyone's name, entirely, especially since they all had first and last names and titles, and they were called different combinations of them through the book.  I think Csevet is the only one I was able to keep track of, because he had the fewest syllables.  There were absolutely points where I had no idea who was on stage for pages at a time, till someone would say something military or religious, or you'd get a "she" thrown in and I could place them.

Also, I think the middle sagged just a little.  It's not that I ever got tired of the character development, or that it ever stood still.  But I realized recently that one of the things I like about stories is watching people solve problems.  This was the problem I had with How to Get Filthy Rich in Rising Asia--not a lot of problem solving--and I think that The Goblin Emperor had a lot more information gathering, a lot more passive preparation for problem solving, than I wanted.  I wanted Maia to take some kind of haphazard control of his life earlier than he did.  By the end, everything was where I wanted it to be, but it took Maia a little longer to get into the right headspace than I wanted--I'd rather have seen a few more fumbling efforts on his part, rather than his very slow movement toward true ownership of his life.

I will say, though, that I'm really disappointed that there probably won't be a sequel to this.  It doesn't need one--we are left at the beginning of a golden age, you can just tell--but I wish I could spend more time with Maia, his bodyguards, his betrothed, Csevet, and the rest.  I wish I could see the great, confident man Maia will become.  That's a pretty great place to leave your feelings about a book.
Posted by LibraryHungry at 9:53 PM